Half-cousin? Still related, just as important as a full cousin! 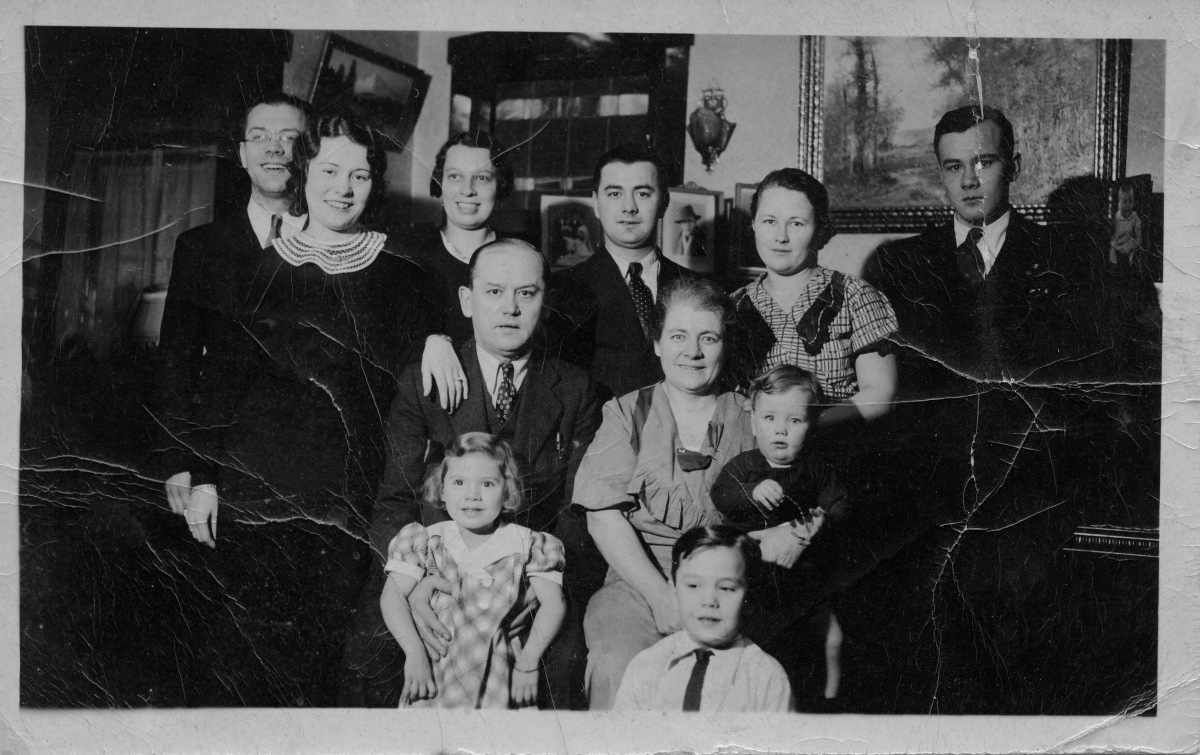 Some photos have had a rough life. The picture above is the only one I have of my mom’s half first cousin, Rose Ahrens Runge, and her family. I’m not sure why/how the photo acquired so many cracks and creases–enough that her son on the right is “missing” an eye.

Fortunately, armed with a scanner, editing software, time, and an abundance of patience, huge improvements can be made with damaged photos. The original was only about the size of a note card–3.5″ x 5″ or so. I decided to scan it at 1200 DPI (Dots Per Inch) for ease of editing, as well as allowing it to be blown up to a larger reprint. I wanted as many data points as possible! I started repairing the easier sections, and moved on to more difficult/complicated areas later on. That allowed me to “warm up” a bit, and get used to the process of filling in those missing pixels. “Clone” and “blur” tools became my friends. The results are much better!

When I finished editing, I sent an 8″ x 10″ print to one of the children in the photo, who was in his 70s at the time. My mom sort of knew who was who, but I thought it would be better to have someone more closely related confirming identities. They are captioned above. I’m narrowing the date based on a couple facts:

This is only a snapshot of time, though. Who were these people? You briefly met Charlie and Rose last week (Love), over a decade later than this, at my aunt and uncle’s wedding. Rose and my mom had the same grandfather, but different grandmothers. Rose was born 13 October 1885¹, making her three years older than my mom’s father (Rose’s uncle!). She was the oldest of seven. Unlike most of the rest of the Meintzer clan, Rose’s grew up in Chicago, not “out in the country” (what’s now the north and northwest suburbs), and remained there as an adult. Getting together with her Meintzer relatives took more effort.

Her husband, Charles August Runge, was born in Chicago, 21 January 1883. He and Rose married 21 May 1906², running off to Hammond, Indiana. Illinois has its 3-day waiting period after acquiring a marriage license, so Indiana and Michigan were (and are!) popular “marriage mills.” No waiting. When I located their marriage register entry, I discovered Rose was actually “Rosalie” — like her daughter. I had only ever heard Rose, so that was an interesting tidbit.

Charles and Rose had five children — that I know about, at least:

I had always heard that Charles was a musician. In doing my “due diligence,” for this post, I came across occupations I didn’t expect:

Now I understand how he got linked with musicians! It doesn’t necessarily mean the story is wrong, though. Yes, it’s possible that someone misunderstood his “working for the Federation of Musicians” to mean that he was a musician. But maybe he had always been working as a musician on the side, and finally had an opportunity to work for them as a bookkeeper. It’s something I need to explore. His obituary8 mentions he was a “member of local No. 10, Chicago Federation of Musicians.” That sounds like he had joined the union. Would he need to do that if he were merely a bookkeeper? Or was that reserved only for actual musicians? More questions, more research.

I also knew Charles painted, because we had two of his oil paintings in the room with our TV. For some reason, they had been framed behind glass — something you shouldn’t do with oil! When my parents unframed them, to remove the glass, one was damaged (some paint peeled off). I’ve also acquired a water color of his. It must have been up on a shelf when I was growing up, as I don’t recall seeing it hung up. Quite likely, the two paintings you see in the background of the photo are works of his.

So, do half-cousins matter at all? Why do I need to keep track of them? Of course they matter! And yes, I do want to know who the current descendants are. Maybe they have photos or information I don’t have. Maybe I have information they need. If we are DNA matches, they are extremely helpful for pinpointing which ancestor we match from. This past week has shown me I need to do a little better by my half-relatives, and fill in the gaps of their trees. The fact that distance and time limitations have left us less in touch with each other is a poor excuse.

Search for something not tagged

© Christine Haws Bauman and Christine’s Genealogy Musings, 2018-2020. Unauthorized use and/or duplication of this material without express and written permission from this site’s author and/or owner is strictly prohibited. Excerpts and links may be used, provided that full and clear credit is given to Christine Haws Bauman and Christine’s Genealogy Musings with appropriate and specific direction to the original content. Just play nice and don’t steal. We’re all cousins, anyway. Let me know you’re out there!